This is the last post of a three-part series on Marx’s “Wage-Labor and Capital,” chapters 7-9. For other parts in the series go to the series page. This post covers how capital deleteriously affects all classes with producing a declining wage.

What Determines the Rise and Fall of Wages and Profit?

Capitalists must replenish the wage with profit. Therefore, the price of their commodities must account for replenishing raw materials, the wear on tools, wages, and profits. As profits rise, Marx argues, wages fall, and vice-versa. I admit, I don’t fully understand this point of Marx, but I assume it reflects the relation of the two. This doesn’t mean that literally if one goes up, the other goes down; it is relative. E.g., if the profits of capitalists go up, wages can go up also, but not at all in the same ratio.

If profits increase disproportionately to wages, the profits as a fraction take up more of the pie than wages. Let’s say a capitalist gains a technological advantage over his competitor capitalists. He can then produce more for the same production cost, thereby gaining more profit than his competitors. This helps consumers but not workers. Consumers get cheaper products- at the expense of workers.

Capital and Wage-labor Are Necessarily Opposed

Rapid increase of profit necessarily involves the rapid decrease of the power of the worker’s wage. The more a worker produces, the more crumbs he gets from the bigger pie of the capitalist, as just mentioned. At the same time, capital requires more workers to work capital. The workers are ever dependent on capital. While wages do increase as capital expands, it can’t possibly keep pace with the rate of capital profits.

Now, the existence of multiple capitalists increases competition between them. Wins come through selling a product cheaper, but gaining more of the market share as well as looking for more markets for the cheaper product. Productive power increases as more innovations impact technology and labor is divided into smaller, simpler tasks.

Effect of Capitalist Competition on All Classes

Capitalists seek to best their competition through further division of labor and new machines to offset the equalization of the playing field by all capitalists obtaining the same machinery. As labor divides and divides into smaller, simpler tasks, competition becomes fiercer between workers, and wages go lower. Why? Because the buyer (capitalist) has the advantage: there are more sellers (workers) than buyers. Good old supply and demand. The worker must do more in the same amount of time or work longer hours. However, the more the worker’s output, the less return on his relative wage.

Economists maintain that as one sector of labor recedes, a new sector will arise to replace it. However, Marx argues this applies to the class, not to each laborer in the class. E.g., the young have more of an advantage in acquiring new skills to be productive for a longer time (and at less pay) than their older counterparts. Marx even complains that the bigger productivity gained through technological innovation replaces the natural strength of men with a woman and three children. This wouldn’t be so bad if workers were in control of the means of production. Fact is, they aren’t.

Again, as more product is made, the more markets are needed to exploit. If the capitalist can’t exploit new markets, he can’t continue to make profit. Marx questions, however, what happens when there are no more markets to exploit. This is one of the contradictions of capitalism.

This is where Marx rather abruptly concludes the work. As technological innovation moves at a quicker pace, profits increase for the capitalists, and for a short period, to the workers.

This is the second of three posts on Marx’s “Wage-Labor and Capital,” chapters 5-6. This post covers the nature of and relation of capital to wage-labor. You can find the rest of the series here.

The Nature and Growth of Capital

Marx also calls capital “accumulated labor.” Production requires specific and reciprocal social relations. E.g., if there is no crude oil, there are no jobs to make cars, or refining plants to make gasoline, or truckers to transport it—and all the communities that form around these sectors become less tied, less communal. Marx contends that social relations vary and alter according to the means of production. Each epoch of the means of production becomes discrete: ancient, feudal, capitalist.

Capitalism is a bourgeois social relation. It operates under the assumption of exploiting a class that can only work, but without possession of property. Elsewhere, Marx equates property with capital. E.g., the worker doesn’t control the property that manufactures iPhones, the property from which they extract rare minerals, the seed patent property of Monsanto, the utility property that heats and cools their homes, water treatment property, or the property of bus and train systems. In the end, capital is living labor serving accumulated labor: preserving and multiplying it; it does not serve the living, except the bourgeois.

Relation of Wage-labor to Capital

In the relation between wage-labor and capital, the former gains subsistence, though this subsistence is consumed immediately for life. The latter receives even more value added to accumulated labor. Marx uses the example of the day laborer getting paid $1 a day, even though he produced $2 of product. This extra $1 of value he produced goes to the capitalist, $1 of value he didn’t work for. Multiply this by 5 workers, 20 workers, 100 workers, 1000 workers. This is that much money the capitalist gains for all the work produced by the laborer(s), again that he didn’t work for.

An increase in capital requires an increase in workers, because it requires that much more labor to increase it. As it grows, living labor more and more serves accumulated labor, both of the accumulated labor of their own making and that which past workers have produced. The capital remains long after workers are dead. Consider the Rockefeller family. The Rockefeller progeny still lives off of the formerly exploited labor of 19th-century workers, while continuing to add more to that accumulation through exploitation of 20th- and 21st-century laborers. Workers perish without work; capital perishes without exploitation. 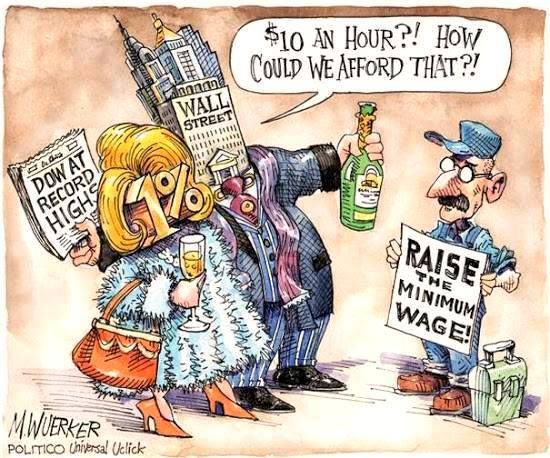