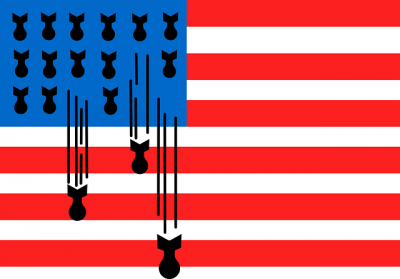 I’ve been reading a lot lately about worldwide military conflict. As the United States entered its 16th year of the War in Afghanistan, I’ve been thinking more about the U.S. military-industrial complex. Why does the American state spend so much on defense? Or propaganda?

American politicians-Republican and Democrat-say we never have enough money to fund those pie in the sky social programs, but have enough to pass a $700B military budget with even the most progressive Democrats voting yes (except Gillibrand, Leahy, Merkley, and Wyden). Why do we spend so much on “defense”? It pays.

Aram Roston uncovered Erik Prince’s slides behind his presentation to privatize the Afghanistan War. Prince’s intentions were hardly subtle. An estimated one trillion dollars’ worth of minerals lies in one province alone. War for defense or resources?

So with the amount of money going into and out of the Pentagon, I thought I’d look into defense contracting. Here’s what I found based off the top 100 defense contractors list on Defense News. Some of the results may surprise you.

One of the consistent arguments of socialists and communists is a withdrawal of the state from war. Why? War profiteering is a big motive in starting conflict on the flimsiest of justifications. It inflicts undue suffering on normal citizens to “get back” at or put another state “in its place” (according to the interests of the aggressor). Defensive wars for just reasons make sense. Just how often America and other capitalist nations conduct such wars is another issue. While that issue is easily answered, I will conclude with a question: how often do the U.S. DoD and war departments of the capitalist nations actually conduct defensive wars?